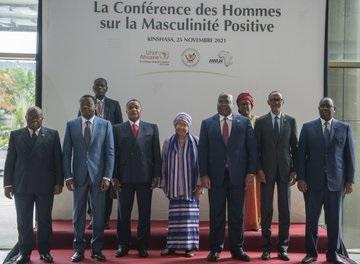 In Africa, the most prevalent forms of documented Violence Against Women and Girls include, among others intimate partner violence  (IPV), which manifests as physical, sexual psychological or economic violence by an intimate partner; Female Genital Mutilation (FGM), which is a common cultural practice in some parts of Africa; Early Child and Forced Marriage where girls below 18 years are forced into marriage; Sexual Violence in Conflict (SVC) and Humanitarian settings which includes rape, sexual assault with violent physical assault, kidnapping, sexual slavery and forced prostitution in conflict situations. Women and girls also face sexual harassment and violence in the work place, in schools and in other public spaces.

The persistence of Violence Against Women and Girls in Africa is mainly associated with gender power relations reflected in well and commonly ascribed and accepted social norms, entrenched in patriarchal systems characterized by male dominance, unequal distribution of resources and power combined with social institutions that sustain gender inequality. These norms in the name of culture, dictate behaviours and attitudes that perpetuate stereotypes which are the most significant barriers to eliminating and preventing VAWG and have an inter- generational impact.

Recognizing the disproportionate level of male responsibility for perpetuating Violence Against Women and Girls, a historic Men’s Conference on Positive Masculinity was convened, by the African Union and the African Women Leaders Network (AWLN), to mobilize and rally African men and boys to support and drive efforts towards the eradication of Violence Against Women and Girls on the continent. Held in Kinshasa, the Democratic Republic of Congo, Men’s Conference secured the commitment of Heads of State and Government; the Private Sector; Religious and Traditional leaders; Academia; civil societies; women and youth to accelerate the prevention and elimination of violence against women and girls in Africa at all levels.

African Heads of State and Government also adopted the “Kinshasa Declaration” expressing their concern on the persistence of violence against women and girls in Africa, despite the commitment of States to eradicate all forms of discrimination against women and girls. Led by Heads of State and Government from the Congo Republic, Democratic Republic of Congo, Ethiopia, Ghana, Kenya, Rwanda, Senegal, South Africa, Tanzania, Togo, committed to ensuring that the necessary policies and measures are put in place by Member States to address any form of impunity while at the same time launching the Circle of Champions to advance the participatory and intergenerational approach that engages all stakeholders, including youth, religious and traditional leaders, civil society, and African women leaders and the private sector, to amplify the call to action to end the harmful and discriminatory practices in the societies. At this occasion, the African Union Campaign on the Ending Violence Against Women and Girls was launched with a zero-tolerance policy for all forms of violence against women and girls in conflict and post-conflict situations to be implemented.

Watch the statements of the leaders in English and French.

In calling on men to be role models for boys as a foundation for fundamental values that define the positive expressions of masculinity on the continent, the leaders committed to provide the necessary resources to address violence against women and girls and called on the private sector to develop and implement policies and programmes that equally support the inclusion, economic and financial empowerment of all African women and girls, in line with the goals of the new African Women’s Decade on Financial and Economic Inclusion for African Women 2020-2030. Further, the leaders committed to support the implementation of the newly developed Maputo Protocol Scorecard and Index as a tool to accelerate the realisation of the rights of women and girls. The leaders committed to follow-up annually, the implementation of the Kinshasa Declaration and Call for action, at the beginning of the 16 Days of Activism Against Gender Based Violence.

Learn more about the Men’s Conference on Positive Masculinity and actions that advance the call to prevent and end violence against women and girls here.